So yesterday I had the esteemed pleasure (lol) of running the Queens 10k for the 2nd time.  I took the entire week off……I felt I deserved a bit of rest so this was my first run since that disastrous run (walk) at Ironman Eagleman last weekend, and I have to say I was really a bit scared to attempt to run again.  After suffering through that unbearable heat I really didn’t know if I could make my legs move in any form of rapid motion again…but alas I did it! Side note…I didn’t realize how slim I’ve gotten until I saw the pic above….check out those guns though LMAO!!!

Anywho, Deb, Allison, and I carpooled it over to Queens.  There were severe thunderstorms forecast for 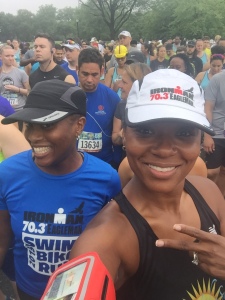 this day, along with rain all day, so they pushed back the start an hour.  BTW, neither happened but it turned out to be a super humid muggy day, and the sun didn’t show her pretty face until the race was over.   This race was huge…and I mean ginormous!  My number was in the 10,000s, and I believe they went up to like 14,000 so there had to be at least 9k-10k people in this race, and I certainly felt it.  It was a tight squeeze at the start.  The race started in Corona Park and the 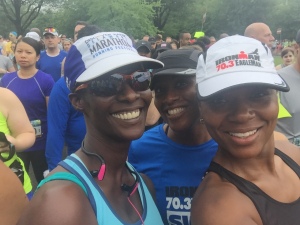 pathways are not that wide, so it made the corrals feel very sardine like.  Of course we had to have a little bit of fun and get some pre-race selfies in!  As I got to the start mat my heart began to race.  I was legitimately very nervous.  It felt like the exact same feeling that I felt before the start of the swim at Eagleman.  I haven’t felt nervous before a running race probably since my first 5k.  I think I just needed to get the jitters out.  Eagleman did leave me a bit traumatized from the run, so once I mentally let it go I was ok.

Fast forward to running.  I was doing a lot of bobbing and weaving the first mile because there were just so many people.  On top of that there were sooooo many people walking early on.  Don’t get me wrong, there is nothing wrong with walking, but just like when you drive a car if you are going slower you should stay to the right.  Faster runners will run to the left so walking there can easily turn into an unwarranted accident.  I was feeling pretty good the first 2.5 miles, but by the time I got to mile 3 the humidity got me.  I was soaked with sweat.  It felt like I stopped in the middle of the race and

took a shower.  At one point I looked down at my crotch and asked myself “did you pee on yourself” lmao!! I didn’t but had to ask myself to make sure because it surely looked like it!  I stopped at mile 3 to get some water and boy was that a mistake!  The water literally tasted like a rusty pipe…it was really disgusting!  I believe at mile 4 there was Gatorade so I gladly slurped that down to remove the rusty water taste from my mouth.  Looking at my time now, I can see how I shut down after mile 3.  I now know that I have to make this summer my training playground, because girlfriend does not do well in heat and humidity…another lesson learned, and I am still chasing that official race sub 60 10k…I’ll get there!

I booked it as best as I could to get to the finishline.  All I could remember was running this race 2 yrs ago and seeing people who already finished with no medals around their neck.  I know we shouldn’t run for medals, but it is always nice to get one.  That wasn’t the case this year (or last) NYRR had nice shiny medals waiting for us at the finishline. 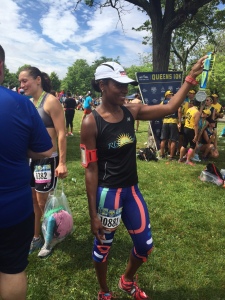 A girl asked me to take a pic of her and this was one of the poses she did.  I thought it was cute and copied her….her pic came out waaaay better than mine…LMAO!!!

So now I am on to marathon training.  The NYC Marathon is about 18weeks away I believe, so I will be pounding the pavement regularly until then.  Still triathlon training as well.  I’ve mapped out my next race, haven’t registered yet, but I am just a click away….it’ll be in about 4 months, so I’ll be working on improving my bike and swim as well in the coming months.