A couple weeks ago I kicked off my multisport season with the Brands Duathlon.  You may recall I did the exact same race last October and it was not pretty!!  Cold and rainy, it was an experience that I will never forget.  You can read more about it HERE.  So this race is also very close to home, so I got to get up maybe a couple hours b4 the race started, showered, grabbed a bite, and was out the door. 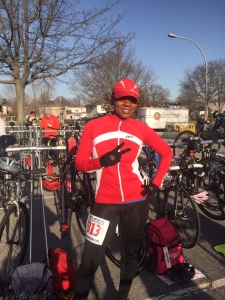 The weather was actually perfect.  I can’t remember the exact temperature , but the cycling jacket I was prepared to wear I didn’t need to because it was just that nice outside.  Yes I do love me some red!  You can catch a glimpse of Ruby (my bike) behind me with the red helmet hanging off the bars.

I have to say Race Awesome did an amazing job with the set up and organization of this race.  If you look very closely you can see a white sticker on the bike rack.  That sticker had my full name and bib number on it.  I haven’t done that many multisport races, but this is the first time that I’ve seen this and it made for a very non-complicated transition area, so kudos to you Race Awesome for making it easier on your athletes.

Preparing to mount b4 the bike leg

This Duathlon was Run 1.2 miles, Bike 11 miles, Run 1.2 miles, so fairly short distance wise, but for a newbie a challenge nonetheless.  I felt really good on the run and managed to squeak out a 8:55 mile pace which is pretty good considering I’m running in the mid 9’s right now.

On to the bike.  The bike is my least favorite of the three disciplines.  I would have never thought that biking would be so difficult, but I am still learning and progressing with every ride.  Now I’ve been riding a trainer indoors since February and have been clipping in so I’ve gotten pretty comfy on the bike, but a couple weeks before this race (maybe a week) was the first time I took my tri bike out on the road, and it was not pretty at all!  In fact it was so ugly that I bust my a$$ trying to clip my left foot in.  The fall was so bad a woman came running up to me asking if I was ok.  I was laughing at myself because I fell but I let her know I was fine and got back up and started my ride.  When I got home and took off my tights I realized my knee was busted up a bit and bleeding.  I’m told I have 2 more falls to go until I am a real cyclists!

I go into this story because this fall happened at the exact same park that this Duathlon took place so I was being very cautious as to not wipe out in front of a crowd full of people while mounting my bike!  The mount went well with no falls.  This bike course is fairly easy except for the fact that about a minute or 2 into it you have to climb a small hill.  This means you have to climb this hill on the way back because it is a looped course.  The only thing that I did not like about the bike course was the u turn that has to be made.  The turn is fairly tight, and turns into a one lane turn which can get a bit tricky if the person in front of you basically comes to a complete stop to make the turn.  On my 2nd loop this happened and I had to steer into the dirt which apparently is a big no no on my bike.  I felt like I was about to fall and had to quickly clip out my left foot just in case.  I actually ended up steering into the oncoming bikes which turned out to not be so bad because there were only a few people coming.  I got back in the right lane and shouted out “sorry guys” and someone yelled “well at least you didn’t fall” and I said “thank goodness” laughed and kept going.  That was my only mishap on the bike other than not going into aero (ugh).  I managed to finish the bike in about 44.77.

My feet felt like bricks of course as I prepared to start the last leg.  It takes me a long time, like the first full mile to get my legs back which was not good because that was all I had!  Coming off the bike I was in 3rd place in my division, but finished in 5th so I have much work to do on my run leg.  This run leg was at a 09:51 pace, so almost a full minute slower than the opening mile.  Now when I think about the mini tri where they wrote our ages on our calfs I am wishing we had that in the Du so I could have seen those 30-34 yr olds running by me!  I’ll catch them next time!

Overall another good race in the books.  I wasn’t lying in bed afterwards so my conditioning was pretty good, and all those early morning training sessions feel like they are paying off.  The countdown to Ironman Eagleman continues! 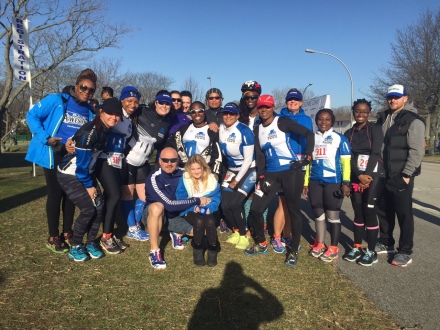