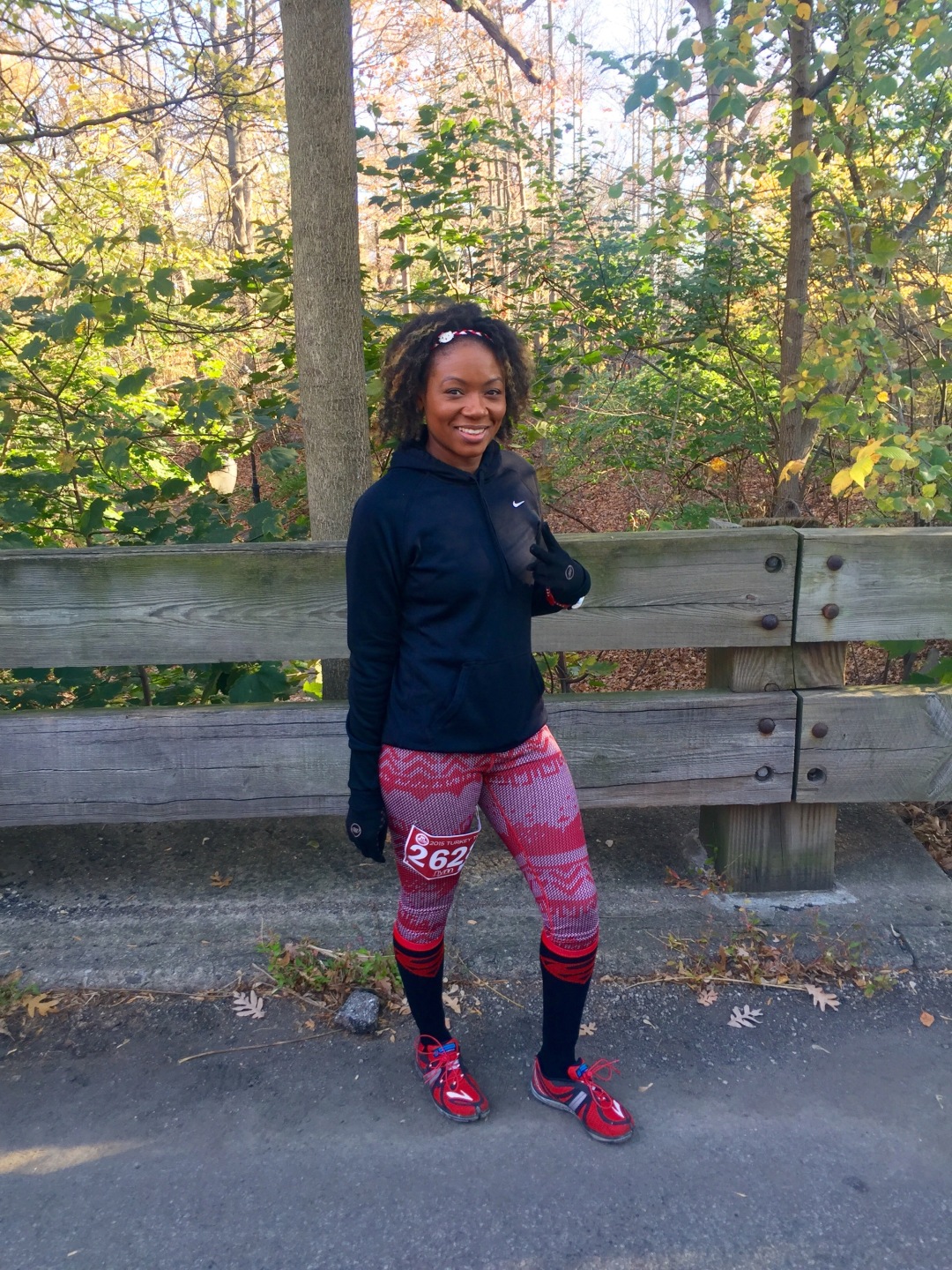 Wishing everyone a very Happy and Healthy Thanksgiving! I think I did pretty ok considering I’ve only run 1 mile since November 1st!! Bring on the Turkey (well chicken! ??) 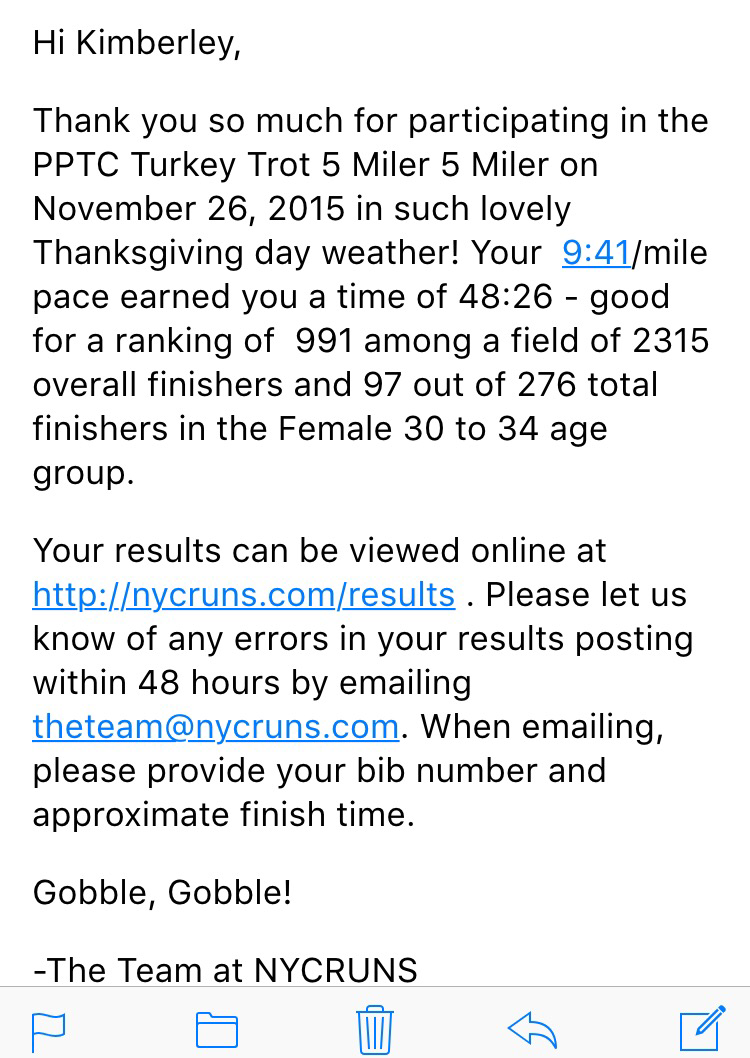 Nice race, gorgeous medal, and I think this was my best 5 miles yes! 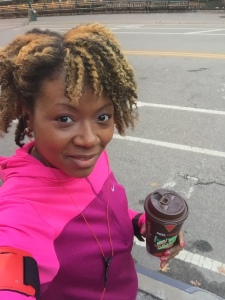 Well I completed race 6 of 9 to qualify for the 2015 NYC Marathon….3 to go!  I saw this question on facebook recently about drinking coffee before a race, and while a lot of people do, a whole lot more said they didn’t for a slew of reasons.  I drink coffee basically every morning.  I may skip a day here and there, but 9 times out of 10 I start with a cup, so race day is no different.  This is me walking to the start with my obligatory McDonalds $0.99 coffee…yum! It is NYC Marathon week, and this race was the Marathon kick off 5 miler.  True to my word from my last recap after the Staten Island Half I did not run one bit in 2 weeks.  I mean not even a brisk mile walk.  I took a much needed break from running.  Partly because I was pooped, but mainly because I don’t think my body was fully recovered after having the baby….even 2.5 months later. I guess it really does take time.  Now I didn’t take a working out break altogether.  I still swam, and completed my first 40 mile bike ride…now that was a doosey!

I had to leave my house very early that morning to make a stop, and I had to pick up my t-shirt and bib (race number) for the race……it was freezing! So of course I threw on an extra layer and I was baking by mile 3, but I’ll get to that later.  This race was very crowded, and it was sold out

online for a while.  Here is a tip a lot of people don’t know: even if a race is sold out online NYRR will still do day of registrations on site.  So if your still trying to get your 9 in to qualify for the marathon and the race is sold out, come out race day and try to register in person.  Don’t try this at the BK Half or any of the 5 boro races though!

That pre-race coffee usually leads to a pre-race need to use the bathroom.  While I hate to use the port-a-pottys, sometimes it is inevitable, and due to the large amount of people the lines were so friggin long.  Luckily I got there early and had enough time to wait it out.

So any ho, NYRR issues race numbers based on your best average pace per mile, mine was in the 7000s based on my 11:02 min mile average.  Now I think this is great for the leisurely runner, but now that I am doing the Ironman I think it’s time to take my running more seriously; especially after taking that long walk to the 7000’s start corral. 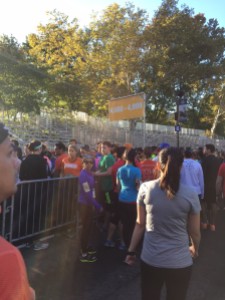 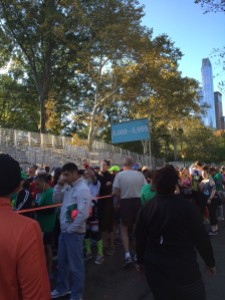 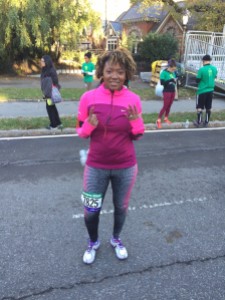 Most of my running buddies are pretty much done with their 9 races, so I was basically alone.  I asked a stranger to take a pic of me and she obliged…cheese, 6th race!  I did run into Deb right before the start (no pic of that!) and we chit chatted a bit.  I looked at her and said “why am I doing this?” as I was freezing my buns off.  I think I say that to myself before every race, because its early and I’m cranky and so not a morning person.  Sometimes after a race I say I’m never doing this again (like the Staten Island Half) but often times at the end I feel that gratification of completing a task and think this is why I do this. 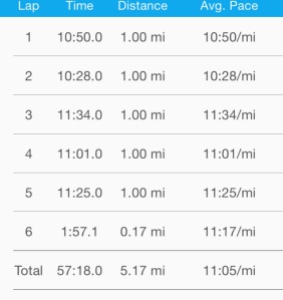 Not having run in 2 weeks I think I did ok.  The first 2 miles were faster than the last 3.  By mile 3 I was burning up and wanted to take off my sweater, but like a fool I wore a pull over and had my watch and armband fastened on top of it, so the only way I was getting it off was by stopping to walk and I didn’t want to do that.  I did walk through each water station and that was the only walking I wanted to do through the race.  Nike thermal gear is no joke.  If it is the least bit warm out you will get hot wearing it, so I can unequivocally say that the thermal gear does its job.  If the forecast is 50 or above do not wear it!  I felt good the entire time.  I didn’t get tired or feel fatigued at all, so I’d say that 2 week break was much needed.

All in all this wasn’t the most eventful or fun race, but it is another qualifier that is in the bag so I loved it.  They did give out the large size Poland Spring water bottles at the end so that was kool…bagels and apples too.  I did see quite a few of the green Poland Spring freebie gloves on the ground.  I didn’t get a pair, but it was nice that they gave them out again.  If your looking for a nice easy qualifier this one is for you….on to the next one!