Hiya…it’s been a while!! I know I always say that! Anywho I’ve been up to lots of fun stuff so I haven’t been chronicling my fitness escapades like I should, but I am back to business now.

A couple weeks ago I headed down to Georgia to do the Publix Half Marathon, and I’ll tell you it was certainly a memorable weekend.  Atlanta is practically a second home to me now since my mother moved there, so I’ve made the two and a half hour flight many times and it is a breeze.

We got in early Friday morning, and as much as I love Atlanta, I hate the Atlanta airport.  All the walking and hoping on a train, then waiting for luggage that always takes forever, it really just poops you out.  Then on top of that we rented as car which was a whole other journey.  I don’t think we got out of the airport until 2hrs after our flight landed.    So after making a few stops we headed to my moms house.  After settling in we went to get a mani/pedi because of course we didn’t have sense enough to get one while in NY.  After all the getting up early I was beyond exhausted.  We got back to the house and I wanted to take a nap, but of course I couldn’t sleep; and we had an event to go to that night!  I went to Deb probably around 9 or 10 and told her I didn’t want to go out.  She said but you told X you would be there…I said I surely did and chucked it up and got ready, and I am glad I did because we had a ball.

Deb and I with Michael Martinez, founder of RunFam

So the weekend was called Runners All-Star Weekend.  We went to a white party Friday night hosted by Run Fam.  The party was at 595 North Event Center which is a warehouse type building; it was really nice.  The vibe of the party was very cool, and it was nice to meet so many people that I interact with on Facebook on a daily basis.

I took tons more pictures, but we would be here all day if I posted them all.

On Saturday we attended Heather King’s day party, and that was also a blast.  I had the opportunity to chat more and meet lots of new people in a day time setting.  The Meet and Greet Day Party was held at 255 Tapas Lounge in Atlanta.  I really enjoyed the atmosphere of this place.  The food was delicious, and the drinks were nice and strong!

I finally got a chance to meet Mr. BTA himself!

Me and Tony Brown, founder of Black Triathletes Association.

On Saturday we headed over to the expo to pick up our race bibs.  The expo was held at the Georgia World Congress Center which is huge.  I’ve been there before for an event and didn’t realize how massive the place was until this day.  I am not exaggerating, from the time we walked in the place, to get to the location were the expo was we walked at least a mile.  I looked down at my watch and saw I had 2000 more steps and couldn’t believe it.  The expo was extremely underwhelming.  I left my Honey Stinger Energy Chews at home so I was on a mission to buy some at the expo.  There was not one vendor there that sold nutrition.  When we first walked in there was a Mizuno (the race apparel sponsor) shop with race gear and very little nutrition.  After walking around the entire expo and finding no vendors with nutrition I was pissed!  I had to walk back to the Mizuno shop and buy sports beans (which taste disgusting) because the only option was energy gels which I just cannot stomach. 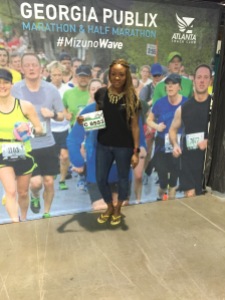 One good thing about the expo was I saw this cute Georgia Marathon hoody, but I didn’t want to pay $65 for it.  After the race they were marked down to $50….score! 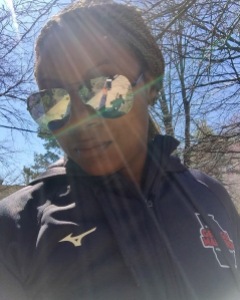 On to race day:  The race started at 7am, so we had to get up at the crack of dawn to get to downtown Atlanta before the streets closed.  The race start and finish were just outside of Olympic Centennial Park.  There were plenty of port-a-potty’s set up so using them was a breeze.  Now bag check was a friggin mess.  The lines were like 100 people long.  I am really spoiled with our NY races because bag check is a breeze.  I really don’t understand why the lines were so long, and why it was taking the volunteers so long to get bags checked.  There needs to be an overhaul of this system for next years race, because it did not work well. 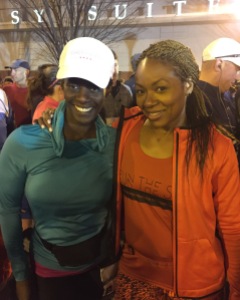 Waiting in the start corrals

So this was the HARDEST half that I have ever done.  Yes I heard the horror stories about the hills beforehand, but I never expected to get what I did.  This was my first time running rolling hills.  In NY we have hills here and there, but no rolling hills.  The hills were never ending!  As soon as you went up one and down another, here comes another one!  The first 3 miles of the race I felt OK.  There were hills of course, but I didn’t think it was too bad and thought OK I can do this.

At mile 4 of the race, we ran by Dr. Martin Luther’s King Jr.’s church Ebenezer Baptist Church.  I decided to stop and take a few pictures of this historic site. 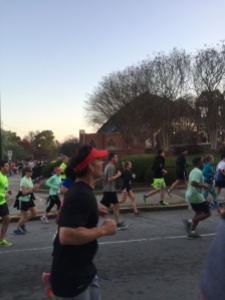 Newer larger church across the street 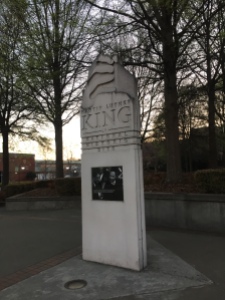 And my blurry while running pics 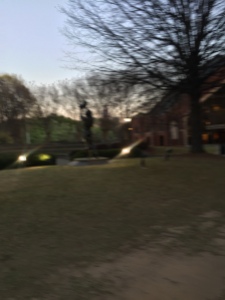 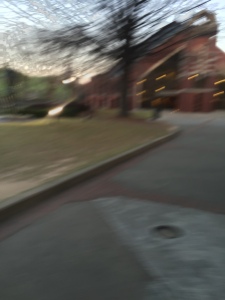 As I was running up the block I was looking for Dr. Kings home.  I was on the left side of the street which was the wrong side.  I thought I saw it but wasn’t sure so I just kept running.  I asked someone after the race where it was and I indeed missed it!  Next time I’m in Atlanta I think I will finally go on the tour of his home. 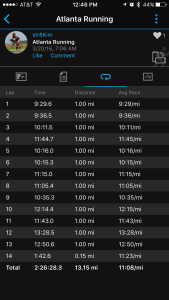 Mile 7 is when I really started to feel the burn of the hills, and I just said F it and starting walking up them.  Since I started taking my running seriously I stopped walking during races.  Well not completely, I still walk the water stations.  If I do stop to get liquids it is usually no more than 30 secs…a minute max but that’s pushing it.  At this point I was so over the up and down that I just walked as fast as I could to get to the top.  Sometimes I tried to run, but I felt like I could walk faster than my attempt at running so I just walked them.  Almost everyone around me was walking as well, or trying uneventfully to run them.  It is very discouraging when you get this far into a half and you have to start walking.  I saw my goal time slipping away from me minute by minute, so my new goal was to just get to the finish line.

The post race swag was great.  They gave at out green throw away jackets as soon as you crossed the finish.  There was full bottles of chocolate milk which I drank right down and took 2 for the road.  Bananas, snack boxes, powerade, and I’m sure plenty things I do not remember.  A con for the race for me besides the hills was the Powerade.  I am use to Gatorade Endurance formula.  This is what I train with, and this is what we get at mostly all NY races.  I’ve drank powerade before, but the regular store bought kind.  Not sure what formula they provided along the course, but it tasted disgusting and had a wretched after taste.  I took it at the first station and skipped all the rest.  This led to minor cramping in my quads in the later miles.

Overall I had a fantastic time this  weekend.  Although this was the most difficult half I have done, I will and am going to do it again.  Next year I think I’ll actually put some training in for it because this year my mile count heading into this race was non existent, and I will bring my own liquids! 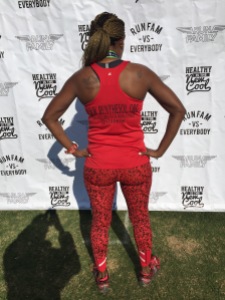 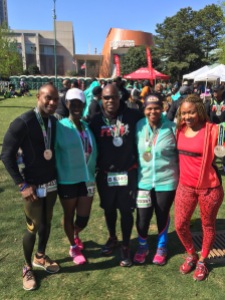 For anyone thinking of doing the Publix Half don’t let the hills scare you.  We get complacent in our running once we reach certain milestones, so it is nice to challenge yourself every once in a while.