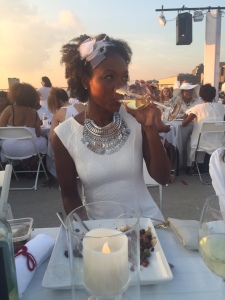 I know I usually write about my active stuff, but I had such a blast last night I had to post about it.  I was finally able to get an elusive invite to Diner En Blanc NYC.  In 2013 I saw that a friend attended the event, and thought wow that looks amazing! So I scurried over to the website and signed up for the wait list; yes the wait list.  You cannot just purchase tickets for this event.  2014 rolls around, and I see that same friend at the event and thought hmmmm I’ve missed out again!  2015 rolls around and low and behold on June 29 I receive an email that I would be able to register in phase 3 (the last group) on July 9.  Apparently they have a waiting list of 35,000 people! so I would definitely consider myself lucky to be one of the 5000 that got in.  I forwarded the email to Allison like do you want to go? and she is like heck yeah! So there is my table partner.  BTW, you only receive an invite for yourself and a +1, so no inviting your whole crew to this event. 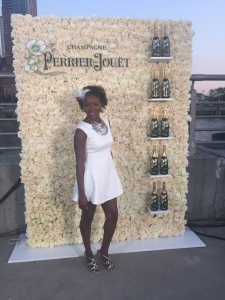 Now just because you receive the invitation does not mean you are automatically in; you still have to register.  My registration time was 12pm, and when 12pm rolled around their website basically crashed.  No one was able to register.  So my phase of the registration was pushed back to 5pm the same day.  Deb was in the 3pm registration slot, and when 3pm rolled around she went in to register and was waiting on “line” and bam the registration was full.  It was utter madness really and people were pissed that they could not register!  But I guess this is what happens when you have so many people trying to access one site at the exact same time.  5pm rolls around and I’m picking up my son from day camp, sitting in my car, and hoping that I am able to register on my phone.  At 5 on the button I clicked the link and waaaalaaaa I’m able to get in.  It took me all of 2 minutes to complete the process.   I was shocked and excited at the same time because I know others were not so lucky.  5 was actually the perfect time because most people were probably commuting home from work, making it easier to get through the process without all the traffic.  There is a member only message board that I was able to post on seeing if anyone had tickets they wouldn’t be using.  Deb who was not able to register, I was able to connect her with someone selling their tickets, and she was still able to attend!  So even if you are not able purchase tickets on your own, if you know a member you can probably purchase someones unwanted tickets with a little bit steaking out the message boards.

So onto the meetup.  My groups meetup was downtown by Houston Street.  We were given an address and a meetup time.  30 minutes later we were scheduled to leave, and if you were not there you would be left!  We were instructed to get on the 1 train and go 2 stops to Franklin Street.  At no point in time were we told the location of the dinner.  Once we got off the train this is when a bit of pandemonium happened.  There was a sea of white clothed peoples everywhere!! We lost our table leader, so we just followed the white figuring they would lead us to the location.  Well that didn’t happen because everyone basically stopped on one street.  So me and Allison weren’t lost, but we were lost because we were missing our group.  Luckily our group leader Alshante gave a phone number to contact her at so I called her, she told me where the group was which was only 2 blocks away.  We were reunited with our group and off we went still walking.  We ended up at Pier 25.  When we were waiting for the train I told a gentleman the stop we were getting off, and asked him where he thought the even would be, and he was right on the nose!

So this event is unique because you have to dress in all white, AND bring your own table, chairs, china, tablescapes, AND food (optional).  So yes we were trucking through Manhattan, with tables and chairs, and some people with food.  It was crazy and exciting.  I found a table in a bag on target.com.  It was super lightweight and easy to transport.  I felt bad for a lot of people because some had those heavy wooden tables that your grandpa probably played dominos on back in the day.  Dragging those things around in 90 degree heat was probably not fun at all.  I found lightweight GUNDE folding chairs at Ikea for $7.99 each.  That was the steal of the century!  A lot of people had them too, so I am sure NY Ikea stores made a killing off of those chairs in the past 2 weeks! 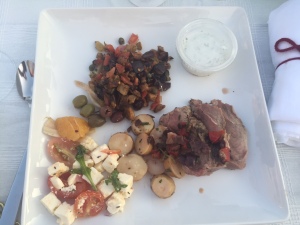 We chose to purchase one of their food options to make it easier. We ordered the Rosemary and Garlic Marinated Spring Lamb which was $100 for 2, and Apothic White Wine which was $26 and was so good.  The food came in clear plastic containers and also included some yummy chocolate cake.  Dinner started at 8 I believe, and we were done around 9:30.  Then it was time for picture taking and dancing!   There were photographers at both ends of the venue taking free pictures.  We took a picture with a beautiful model that we haven’t received yet, but it looked amazing.  All in all the night was incredible.  This is an amazing event, and if you are lucky enough to attend you will not be disappointed.  Yes it is a bit of a trek to get there, but if you read all the materials before hand you are warned about this.  I surely hope I will be able to attend next year because it was awesome!

Here’s a portion of my snap chat from the night…I think its pretty funny that I keep playing in my hair! 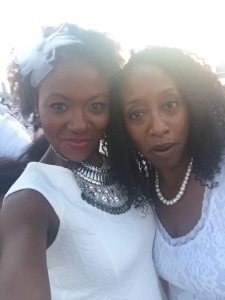 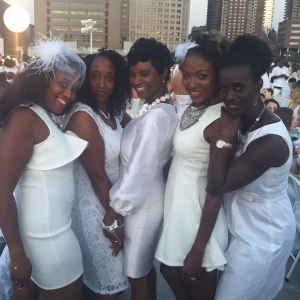 With the girls! None of us sat together, but we were able to meet up

Ran into Janelle….haven’t seen her in 8yrs!!!