I ran the half marathon (13.1 miles) at the Long Island Marathon.  When I woke up I checked the weather and it was a bit on the cooler side, but would warm up later, so I grabbed a sweater just in case I was a little cold in the morning.  I ended up not using the sweater at all since it warmed up pretty quickly.

This race is close to home so getting there is a breeze, but the parking situation is a mess!  The race starts in one place and ends in another which is a logistical nightmare for a runner.  I parked my car in Eisenhower park because that was where the finish line was, but this meant that I had to trek like a mile and a half to the start.  Additionally I had to get to the park super early (6:45am) just to make sure I was able to get in since there were road closures starting at 7am.  The race didn’t start until 8am so it was a bit of a waiting game.  I’m happy that I at least got to wait in my car so that I wasn’t freezing my buns off!  Oftentimes we have to stand around in the cold waiting for a race to start and trust me it is not fun at all!

After making it to the start with my coffee in hand I was able to snap a few pics.  Of course my obligatory deuces up photo….can’t leave home without it!  You can see the mob of people behind me, and trust me that is a very small snap shot of the number of people out there…it was really a huge race! 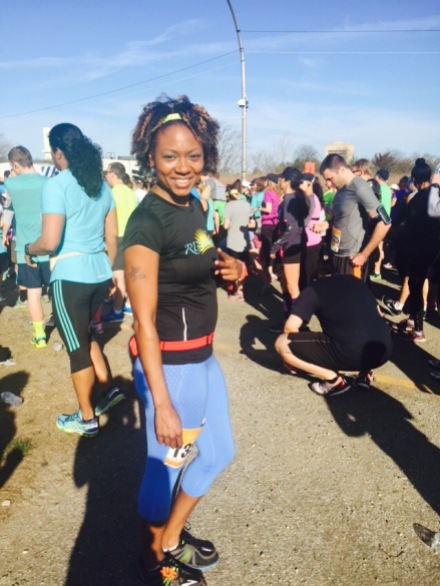 With my buddy Deb.  No she is not frowning, but we were facing directly into the sun.  Not sure how I kept a straight face with this one.  How do you like our RUNtheSol tanks?? Cute huh!  Check out http://RUNtheSol.com for more details.

So once the race started I was feeling really good.  I know I wanted to keep my pace in the 9’s so that I could maintain it throughout the whole race.  My goal was sub 2:30 which is probably more like a 10 minute pace, but I wanted the extra wiggle room just in case I conked out in the end (which I did), so in the 9’s I went.  I was chugging along and even had a running buddy the first 10k.  I didn’t stop at any of the water stops because I don’t usually need any until mile 6 so I stuck with that plan.  Once I got to mile 6 I was a little under 60 mins…I believe 58 minutes, so I knew it was time to take in some fuel.  This was my mistake.  I stopped at the mile 6 for water and to take my honey stinger energy chews.  I sipped, popped 6 stingers all while walking.  Now don’t get me wrong, there is absolutely nothing wrong with walking the water stops.  Sometimes it can give you that bit of rest you need to keep going, but in my instance it really slowed me down tremendously.  I felt like I lost all of my momentum after that first small walk…and by small I mean like 20-30 seconds.  After that I could not get my pace below 10.  I was constantly hovering around 10:30, sometimes lower.  No matter how much I tried to move faster my legs just would not cooperate.  Sometimes when I though I was moving faster I would look down at my watch and be at an 11 pace!  I really though I was in the twilight zone because it just made absolutely no sense! I just could not fully control my body.

There was one part of the race where we were running on the Wantagh Parkway, and it was like zombies running on the highway.  It was eerily quiet except for the patter of runners feet.  At that point I wish I had some music to listen too!! This was also the never ending hill climb.  Somewhere between mile 9 and 10 I was just thinking to myself will this hill ever end.  It was the longest gradual incline I think I’ve ever ran!  As you can see after mile 6 my per minute mile really increased.  I’ll have to work on that for my next half in 10 days.

I blew my sub 2:30 time out of the water with a time of 2:15 which I was really happy about.  I was looking at my watch often those last few miles because I knew I was slowing down, but I knew I was still making pretty good time.  Once I crossed the finish line I just thought to my self wow, you did much better than expected!

There were a few freebies at this race.  You can see my gratis #LoveSnapple shades below.  They had a booth at the finishline and were giving away canvas goody bags with t-shirts, glasses, and stickers. 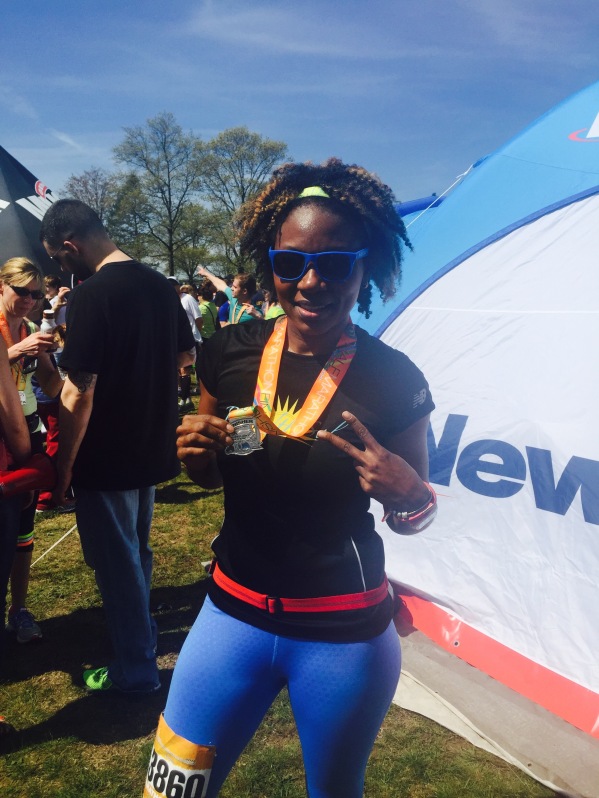 There was also a beer pit.  There was tons of free beer.  Why someone would want to drink beer at 10:30 in the morning I have no idea, but more power to you!  I think the registration fee was worth it in the free beer alone!

Yes I love my headbands….my collection is getting OOC! 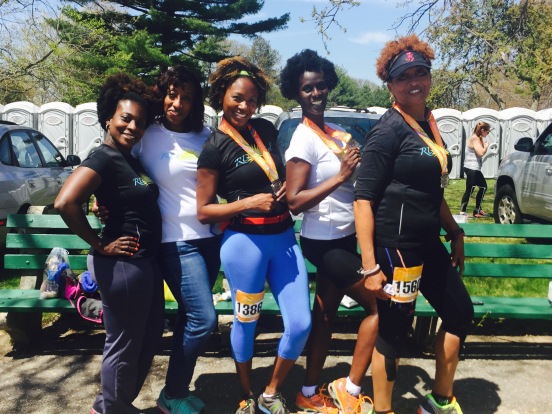